Did you know that Germany is credited with starting the Christmas tree tradition as we know it. It then made its way to England via Queen Charlotte. How do I know this? Because I'm a nerd who reads a lot of stuff and also because award-winning author Nancy Churnin has written a book entitled The Queen and the First Christmas Tree: Queen Charlotte's Gift to England. It has received some great reviews:

“Simple prose and light watercolors keep this retelling of historical events within the understanding of children who like a good princess story.”—Kirkus Reviews
“This piece of history reads like a story, and the charming pictures add to the fairy-tale feel. But, as the author's note reveals, this is history—a little-known piece of it. There are many holiday picture books, but few are nonfiction, making this a worthy addition to Christmas shelves.” — Booklist
“Charlotte’s enduring legacy spread from England to the United States and continues today. Delicate full-bleed illustrations done in a muted palette give the story an old-fashioned feel. A brief biography of Queen Charlotte is included as well as a list of further reading on the topic. VERDICT This additional purchase can teach young students about the origin of the Christmas tree as well as biographical information about this nature-loving monarch.” — School Library Journal
“Based on the real-life events that brought the Christmas tree to Britain, the approachable text emphasizes Charlotte’s generosity, concern for children’s welfare, and lifelong love of nature. Soft-lined illustrations in a muted palette portray a humble and relatable queen who is happiest amidst children or in her gardens.”—The Horn Book

Nancy was kind enough to take time out of her busy schedule to discuss The Queen and the First Christmas Tree.  Here is the Q & A:
How did you get the idea for the story?
Curiosity! I always wondered how the tradition of the Christmas tree began. I started searching and I found this story of Queen Charlotte who introduced the first Christmas tree to England in 1800. That led to more questions. Who was she? What did the tree mean to her? I kept searching and discovered she was a German princess who left her country and everyone she knew when she boarded a boat to marry King George III when she was only 17. And yes, that is the same King George who lost the colonies during the American Revolution. King George has become famous all over again because of the ‘Hamilton' musical, but nobody ever talks about Charlotte. And the more I knew about her, the more I loved her. I love how she cared more about growing things in Kew Gardens and caring for children than she did for dressing up for fancy balls. I love how she was so against slavery that she and King George refused to take sugar in their tea because the tea has been grown on plantations tended by slaves. I love how she and King George were the first British royals to make charitable giving part of royal duties.
How extensive was your research and did you have any problems along the way?
I found it difficult at first to find answers to all the questions I had about her. There are encyclopedias and historical articles where I found basic facts about the big biographical dates in her life as well as about at the Christmas tree. But I wasn’t sure I could trust all the information I was gathering and I had specific questions about what the yew branch that she grew up with in Germany looked like and what plants she might have tended growing up. Then a friend put me in touch with Dr. Carolyn Harris, a royal historian and professor of history at the University of Toronto School of Continuing Studies. She read my manuscript, corrected errors and gave me details that brought Charlotte’s story to life, including the fact that winter thyme grew near her home in the Duchy of Mecklenburg-Strelitz.
Tell us a bit about your writing journey with this book? Did you have many revisions?
I knew I wanted to tell the story of how Queen Charlotte introduced the Christmas tree to England, but I learned I had to dig more deeply into who Queen Charlotte was and why motivated her to do that. I had to move from telling what happened to telling why it happened. I remember the first helpful critique I received from an editor at the 2016 WOW retreat in Helen, Georgia, pointed out that the story of the tree was fascinating, but I hadn’t yet brought Queen Charlotte to life.   That’s when I burrowed in and revised until instead of having a book about the first Christmas tree in England, I had a story about the fascinating and kind woman who brought that tree to England. 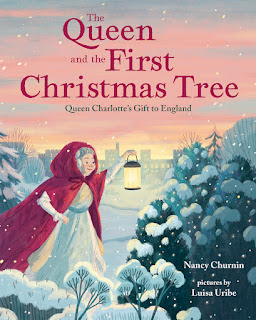 What was your reaction the first time you saw the illustrations? Do you have a favorite page or spread?
I was enchanted by the illustrations! Luisa Uribe made it look like a fairy tale, which was absolutely perfect, because I had always envisioned this as a fairy tale that happened to be true. I love all the pages. I have a particular fondness for this one, when Princess Charlotte is trying to protect her winter thyme while the other princesses are adjusting their dresses and hair and looking at her, puzzled, through the window. It shows from the start how kind she was, how she braved the cold to protect her plants and how she did what she thought was right, regardless of what anyone else thought. It also sets up the climactic scene later when Queen Charlotte will take a walk outside in her garden, trying to think of a way to make a Christmas party special for 100 children, and come up with the idea of dragging an entire tree into Windsor Castle. 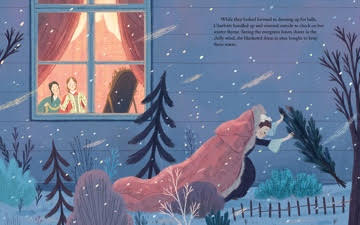 What do you hope readers take away from this book?

I hope they will be inspired by this story of a kind princess who became a kind queen and that being a queen is about more than fancy gowns or glittering jewels. It is, at is best, caring for others as Queen Charlotte cared for plants and people, from orphans that she cared for at court to mothers that she helped survive childbirth by funding the hospital that was called The Queen Charlotte and Chelsea Hospital in her honor. She didn’t live to see England’s Parliament abolish slavery  in 1833, but her steadfast opposition helped change hearts and minds. I always have a Teachers Guide and project with my books. I hope families will check out the Teacher Guide, which has a lot of fun extras, and try the project, which is A KIND HOLIDAY. In honor of this kind queen, I am asking kids to share about kind things they do for others at whatever holidays they celebrate. I have A KIND HOLIDAY page set up on my website, www.nancychurnincom. I look forward to sharing and celebrating the kind things kids do.

Nancy is also offering a free book to one lucky person. All you need to do is leave a comment regarding a tradition you enjoy during the holiday season and/or tell about something kind you have done for others during the holidays.  Also, though it's not required to enter, it would be great if you could also skip on over to Nancy's A KIND HOLIDAY page and take part by sharing a photo and a few words about a kindness you've done for others for whatever holiday you celebrate.  By sharing, maybe you'll inspire others to help kindness grow like Queen Charlotte's garden.

This giveaway is open to anyone and the deadline to comment is Sunday, December 16th. The winner will be announced by December 18th.

Thanks so much, Nancy, for taking time out of your business schedule to be interviewed and for offering this fabulous prize. 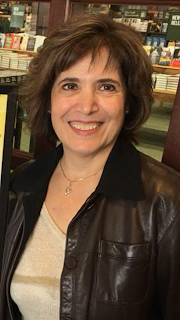 Nancy Churnin is the theater critic for The Dallas Morning News and author of THE WILLIAM HOY STORY, HOW A DEAF BASEBALL PLAYER CHANGED THE GAME, on multiple state reading lists; MANJHI MOVES A MOUNTAIN, winner of the 2018 South Asia Book Award; CHARLIE TAKES HIS SHOT: HOW CHARLIE SIFFORD BROKE THE COLOR BARRIER IN GOLF, winner of the Silver Eureka Honor Award; IRVING BERLIN, THE IMMIGRANT BOY WHO MADE AMERICA SING, on multiple best of year lists, including7 of the Best Jewish Books for Kids by Children’s Book Review; THE QUEEN AND THE FIRST CHRISTMAS TREE, featured on the Royal News Blog. On March 5, 2019: MARTIN & ANNE, THE KINDRED SPIRITS OF DR. MARTIN LUTHER KING, JR. AND ANNE FRANK. In 2020: BEAUTIFUL SHADES OF BROWN, HOW LAURA WHEELER WARING PAINTED HER WORLD. A native New Yorker, Nancy is a graduate of Harvard University, with a master's from Columbia University School of Journalism.