The Germany/Austria chapter's Fall Retreat took place from the 19th to 21st of October at Rhoen Residence hotel near Fulda. We chose this location because it's smack in the middle of Germany. With members all over the country, we wanted to provide a place where everyone could make it there in a reasonable time.

The retreat didn't include any faculty this year. Instead, we focused on a calm and inspiring ambiance for the members to work on personal WIPs. In the end, seven members signed up for the retreat, five writers and two illustrators. This made for a neat little group. 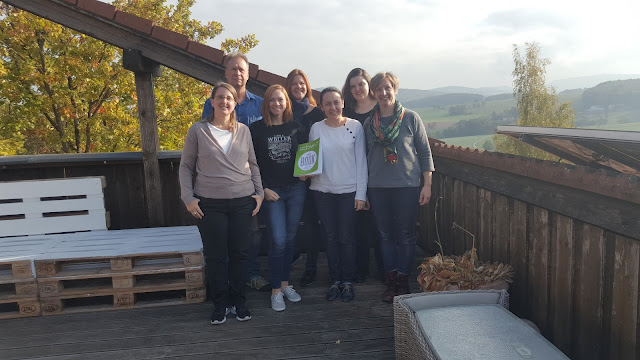 The schedule included a get-together dinner on Friday night since most of us had not yet met one another. Some members met up early and acquainted themselves prior to dinner, arriving early to take full advantage of the weekend.

For Saturday we had a conference room set up with work desks for all attendees. We went there after a joint Breakfast and set to work. The arrangement including lunch on Saturday and another Breakfast on Sunday. And even afterward we went for some more work. Courtesy of the hotel, we were allowed to use the same conference room we had the day before on Sunday until noon.

The retreat's goal was to provide time for the attendees to work with a focus on their projects. This is why we deliberately avoided pre-scheduled talks, discussions, or activities. This promoted the feeling of an uninterrupted, quiet writing time and enabled members to dive deep into their WIPs. We used the coffee and lunch breaks to get to know each other. During breakfast and dinner they was plenty of time for chatter and discussion - often about craft issues as well as tips and tricks from PAL members.

We all left the location having made significant progress on our WIPs. On top of that, we got to meet some splendid people and had a brilliant time.

Here are a few members and their personal recollection of the event:
Patti:

For me, the retreat came at the perfect time. I had just received revision notes from my agent on my WIP and wow - did I have a lot of work to do! At first, I was wary of working in a room with others because I’m usually quite sensitive to noise and distraction, but turns out I loved it and was extremely productive. It was so heartening to look up from my book and see six other people all busy working. Really put fire underneath me to not slack off. This weekend was one of the most productive I’ve ever had. I managed to edit 84 pages over three days and get a good grasp of how to handle the rest.
But of course, that was only one part of the weekend. Going to a SCBWI event is like coming home. Being with other creatives and talking about life, publishing and everything in between was both relaxing and inspiring. And I’d be remiss to not mention the awe I feel for every single person there and their work. It was a fantastic weekend and a repeat cannot happen soon enough.
Many, many thanks to our new RA Katja, who took an idea and made the weekend much better than I ever could have!


Lily:
I looked forward to the retreat as a great opportunity to spend time with other writers, but what surprised me was the amount of work I actually managed to do. There’s something magical in being in a room with several creative heads doing creative work together. Something clicks in the brain, and the juices start flowing. It was a very productive, inspiring, and fun weekend. We have to do it again!


Michael:
I fully enjoyed the company of a small group of competent fellow writers and illustrators in a relaxed and at the same time very professional atmosphere in a nice hotel near Fulda. The group spent productive hours working quietly in the "conference room" or in the hotel room. In the breaks, we had interesting conversations where we exchanged tips and tricks of the trade and learned from each other.
We met for dinner, lunch, and breakfast for more personal talks and had a really nice evening walk on our second day.
I would surely register again for another retreat with this SCBWI group – or another – next year, as this form of get-together proved itself to me to be worth both the money (hotel) and the time spent together in this focused environment.

Outlook for the future:
Since the reception of the event was positive throughout all attendees, plans for a similar event are already underway. Details will come to you via the monthly SCBWI newsletter. I hope to see you there!

Winner of The Field giveaway

In our last post we shared an interview with author Baptiste Paul.  If you missed it, you'll want to check it out HERE.

At the end of the post we offered a copy of his book The Field to one lucky person among those who commented.


My daughter (who is home after getting her wisdom teeth out) wanted to mix the slips and pick a winner. I had to promised not to show her swollen hamster cheeks face
but you can see that the winner is...


Thanks again to Baptiste for taking time to answer our questions and to all who read the post and commented.

And CONGRATULATIONS, Vivian Kirkfield. Please let us know if you prefer to receive the book in English or German.