A Children Writer’s Conference to Remember 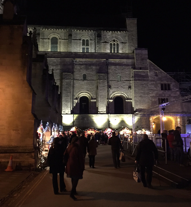 Winchester is, in my opinion, one of the most beautiful medieval cities in the world and home to the SCBWI British Isles annual conference. Though far, far away from any Teutonic border, the seasonal Christmas Market was in full swing. There were promises of authentic German sausages and fried potatoes (No they weren’t. Sorry.), spiced mead and gourmet cheese sandwiches (y'all, the sandwiches had proper streaky bacon on them ... yes!). 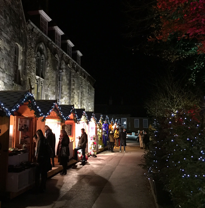 The cherub voices of the boys’ choir penetrated the thick cathedral walls and filled the lit courtyard with sounds of joy. It was definitely a moment. But the real moment came when I arrived at my final destination: The SCBWI Writer's and Illustrator's Conference - New Readers Ahoy!

The lineup was stellar. Natascha Biebow, author and SCBWI British Isles Regional Advisor, opened the conference with a talk about why empathy is so important in everything we do. Georg Kirk, Co-chair of Conference Committee, impressed with her ukulele and gave us an original song about Philip Reeve and Sarah McIntyre, keynote speakers and author/illustrator duo of Oliver and the Seawigs, Cakes in Space, and Pugs of the Frozen North.

Sarah and Philip made us laugh and gave us some sea monkey wisdom to take-away:

One fabulous speaker followed the next. Jonny Duddle, illustrator extraordinaire and visual re-imaginator of J.K. Rowling’s Harry Potter books talked about how his meager beginnings of being a pirate (yup, he lived on a pirate ship for a year) shaped his future. The 10 years between his first rejections to his submission that was finally accepted is a true inspiration for Don't Give Up! 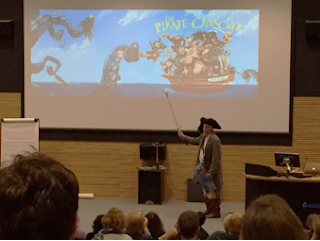 
There were several breakout sessions that morning. In one session, a panel consisting of David Maybury, Commissioning Editor at Scholastic Children's Books, Joanna Moult, Director at Skylark Literary, Paula Harrison, writer and author of The Rescue Princesses and Dylan Calder, Founder of Popup Projects CIC gave us insight into how to hook in new readers. 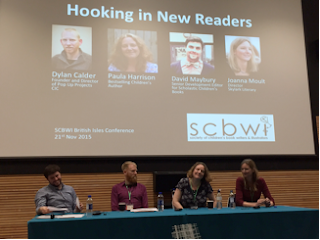 My takeaways from this session:

Saturday’s finale is what happily-ever-afters are made of. Four courageous ladies ventured before a panel of five publishers to pitch their books in the newly created session called 'The Hook'. Each candidate, pre-screened from submissions, received a mere five minutes to pitch their stories.  It was nerve wracking to watch. They bared the souls of their books to that panel of five (did I mention that there were about 200 onlookers?) and stood bravely to receive feedback. But there can only be one Next Top Author. And the winner is? Sheila Averbuch! She won an hour-long 1to1 with the industry publisher of her choice from the panel. (She also won the 10-word pitch contest. Oh, oh Sheila, you have a way with words!)

This year the gala event was held at the Winchester Discovery Centre and sea inspired fancy dress was in order. 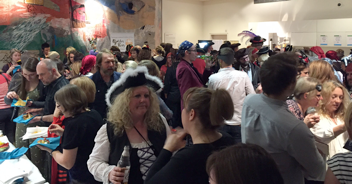 There were swashbuckling pirates, mermaids, mermen and anything having to do with the sea, swaying to the live musical quartet. A mermaid won the fancy dress contest (yay, Kathy Evans!) and the mass book launch finished with a designer cake. Books. Cakes. Pirates. It was a good evening! 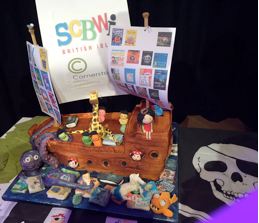 Bowties and Bards
The grand finale came on Sunday morning when David Fickling graced us with somewhat controversial keynote.  For two lovely minutes to warm us up, we put on our dancing shoes and escaped to Jack Rabbit Slim's. Uma Thurman and John Travolta would have been proud.

The keynote was a tale of David and Goliath. A tale of two worlds; both of which David has been a part of. Having just recently broken away from one of the $30 billion earning publishing houses, David enlightened us as to how a smaller publishing house can be mightier than the giants. His example: Running Girl by Simon Mason. While it was at a big publishing house-that-shall-not-be-named, it only sold 1200 books over several years. After only 6 months at David Fickling Books, it sold over 10,000 copies. The moral: thinking big sometimes mean thinking small.

In addition, we learned of famous writers from the past like the bard William Shakespeare and who received no royalties for their work. Zero. Nada. Naught. And it appears that Mr. Fickling is also an inspiring bard. He recited Sir Thomas Wyatt’s sonnet Whoso List to Hunt, I Know Where is an Hind. What can I say? Only he who looketh dapper in a bowtie, mayeth recite an ancient sonnet about Anne Boleyn and cometh away unscathed by the masses.

I can’t wait to see how they will top it next year. One thing is for sure: I need to fill my closet with more fancy dress! 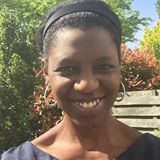 Teara Kuhn is an aspiring writer of children's books. When she's not writing, she enjoys travelling, cooking and dabbling in design and all things beautiful.