Out on the field: An interview with author Baptiste Paul

By now all regions of Germany and Austria have started school. Our regional groups that took summer break are in full swing again, and our blog is back in action. We'll be posting about all things writing related. We'll continue to showcase our regional members but will also visit with other writers and illustrators from other SCBWI chapters who we can learn from.


Today, I have the pleasure of introducing you to Baptiste Paul. His picture book debut, The Field, released in March of this year (as well as the German edition, Das Spiel). His second book, a non-fiction picture book co-written with his wife Miranda, Adventures to School: Journeys from Around the World, published in May. A third book, I am Farmer: Growing an Environmental Movement in Cameroon will be out next year. And that's just the beginning for this wonderful writer. 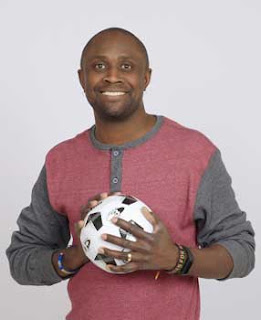 Welcome, Baptiste. Thanks for taking time to share a bit about yourself and your book. My first question is: What inspired you to write this story?
The inspiration for THE FIELD came from my life experiences as a child. The idea to write it as a children’s book, however, came on a day that I was playing outside in the rain with my kids. Moments I spent playing in the rain (and mud) brought back happy memories. Imaginative play and sports were my escape from reality—the poverty and hardships I endured every day. It’s tough to talk about the struggles, though, because people start feeling sorry for you. To be honest, most of my childhood memories were quite fun.

Wow, that is the perfect example of “Write what you know.” We are often told to dig into our memories and experiences to find story ideas. THE FIELD is the perfect example of how to do so.
Though the story follows a girl and her brother, to me the main character is the girl. She shows up on every page. Yet, her name is never mentioned. Was that intentional?
I can’t take credit for that, however, when I played as a child both girls and boys were out in the rain and the mud splashing.  The main character can be any kid, really. Everyone deserves equal representation, and especially in books and media. Girls play outside in the rain and mud just like boys. By making the main character a girl it sets the tone that we are all equal and that girls can do anything. Boys need to know and respect that just as much as girls.
Excellent point. When I compare the literature of my childhood to those being published today one thing that has improved is diversity in books. More youngsters are seeing themselves represented. That's great.
Now, let’s talk word count. Your text is really tight. With only 151 words you wrote a meaningful tale with simple yet poetic prose, and there’s this perfect play between the text and pictures. How hard was it to pare it down to such a minimal text while still retaining the story and its meaning? Were you able to make more cuts after the illustrations were complete?
The story was written over four years. I made quite a few edits over that period. I even shelved the story for a few months.  I liked the story but I couldn’t feel it or was not in love with it at that moment. I could not see the world clearly on the pages. After a few months, I realized the missing piece was the use of Creole words. Introducing the Creole words allowed me to eliminate a lot of the English words.
The illustrator Jackie Alcantara captured the world I envisioned perfectly. There were no cuts made after the illustrations were complete. I just cried after I saw my world through her eyes.
Yes!!! I absolutely love Jackie Alcantara’s illustrations. They are so colorful and lively. Not only do they show the movement of the game well but they somehow capture the mood and emotion of the tale as well. A perfect combination of pictures and text working together.

Just look at cover. It drew me in right away. 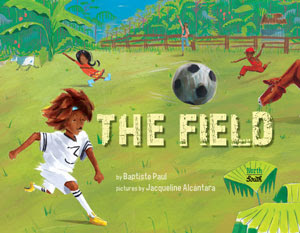 Let’s take a closer look at your words. As a mother raising a bilingual daughter, I noticed something else wonderful while reading The Field. Within the short text you also managed to scatter Creole words though the story. You include a glossary and pronunciation guide in the back matter. Children can learn words like futbol (soccer), bol (ball) and goal (goal). My favorite part is when the girl offers her hand to an opposing player after he falls down in the mud. She asks, “Ou byen? (You okay?) That captures the spirit of a sportsmanship while introducing new language. Had you interspersed Creole through the story from the first draft or did that slowly evolve into the text.


The first draft was written entirely in English. The story went through many revisions. Although the story made sense in English something was missing — and that something was the use of my language — Creole. Creole (Patois) is a beautiful language, and it’s mostly spoken rather than written. When I read and when I write I process everything in Creole first. When we played, we yelled out in Creole, or a mix of both. Being authentic to the story meant I had to use Creole words.


Most picture books cover more than the story. There is usually an underlying theme. I think The Field has more than one. It’s not just about a friendly pick-up game of soccer. There is so much more. What do you hope readers can take away from this story?


My hope for this book is to ignite an enthusiasm for reading or writing, and a curiosity for connecting with kids from other cultures. I want every child to take my story and make it their own. Make time for play. Start conversations! Create memories!

I think they definitely will, Baptiste.

And one lucky SCBWI member can also do so. We are giving away a copy of THE FIELD. All you have to do is leave a comment on this post by October 20th*.  Tell us something related to this interview and let us know if you'd prefer the book in German or English. *Contest is international. Personal data won't be shared and all data will be deleted once the winner has claimed the prize.)
Also, check out this book trailer of The Field from NorthSouth Books.

Baptiste Paul is a Caribbean-born author of two books for children. His debut picture book, The Field, received starred reviews from Kirkus, The Horn Book, and Booklist. According to Kirkus, his co-authored book Adventures To School, will “will pique readers’ curiosity.” His forthcoming picture book biography, I Am Farmer, chronicles the work of Cameroonian environmentalist Tantoh Nforba (2019, Lerner/Millbrook). Born and raised on the island of Saint Lucia, Baptiste is a native Creole/Patois speaker who enjoys reading his books and sharing about his experiences with anyone who will listen.