So you've got your first (or second, third, twentieth...) draft of your book completed and now need to polish it to perfection. It's a daunting task, and you might not know where to start or how to do it effectively. After all, completing the starting draft was hard enough!

If this sounds like you then you should have been with us at the DAZ in Stuttgart on October 15th. Author Dan Wells graciously agreed to give a free workshop on finishing your work. Thank you, Dan! And also a big thank you goes out to Lindsey Cole who organize the event for us. 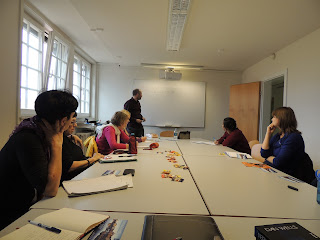 Twelve attendees, both SCBWI members and non-members, learned helpful finishing techniques as Dan shared his own method with us. Having published eleven books to date, Dan has developed an effective step-by-step plan to go from starting draft to finished manuscript.

Great point. But, of course, getting from the “what” to the “how” takes a lot of time, revision, and editing. To make the process easier, Dan broke everything down into three phases: wide angle, close up, and polishing. Each of those phases has several steps which include tasks such as evaluating your first page, foreshadowing, chapter breaks, emotional pull, ensuring a satisfying ending, line edits, and much more. I won't list everything here but will tell you that his method is very thorough.  As a picture book writer who is just venturing out into the world of middle grade and young adult fiction, I found it very helpful.

During a question and answer session, further writing topics were discussed. These topics included anything from writing groups to agents. We also asked about the recently released film of his first book in the John Cleaver series, I am Not a Serial Killer, and about his new book Bluescreen.

Thank you Dan for a wonderful workshop and an enjoyable day.

Dan Wells is the author of the John Cleaver series and the Partials series. He also has several stand alone books and short stories. He has been nominated for both the Hugo and the Campbell Award. If you are not familiar with Dan or his books, you can learn more at his website:

Dan has also won two Parsec Awards for his weekly podcast Writing Excuses. The podcast offer tips on anything writing related such as character development, pacing, motivation, and the dreaded “killing your darlings.” You can check it out here:

There is also a Writing Excuses Retreat which takes place on a cruise ship, and in 2017 it will be coming to Europe. Tentative dates are July 30th-August 5th. Keep an eye out on the Writing Excuses event page if you are interested in writing and learning while cruising in the Baltic Sea.