The other day, a friend of mine exclaimed, “You know MERCER MAYER?”

“I do,” I answered, “sort of. We’re Facebook friends and he’s really nice.” My friend was beside herself about how cool it is that I am “friends” with Mercer. “Yeah, and I chat fairly regularly with Jane Yolen, too.”

Then I started to think about the number of picture books I have with personalized illustrations, from Mo Willems, Mark Teague, Daniel Jennewein… and I realized how true it is. We kidlit folks rub shoulders with awesome people. Even if it’s only on Facebook or at a workshop or conference, we get access to the “unreacheable” icons of our time.

This was true last Saturday, November 16, when a group of us showed up to glean what we could from Dan Wells, character-driven story extraordinaire. “Dan Wells led your workshop? Well that’s awesome,” exclaimed another friend.


Dan (I can refer to him by first name, since, ya know, we’re tight now) was so down to earth, funny, engaging, and all around great. Exercise after exercise kept us practicing new skills on developing characters, plots, and ideas. When I asked Lindsey what she was taking away from the workshop, she said, “I realized that I don’t know my MC at all!” I imagined her sitting on a train having a written interview-style conversation with her MC, determining whether she was fulfilling her job duties or whether she needed to be fired. (My bet is that her MC will keep the job and they’ll go for some coffee and deepen an already budding relationship).


I found that I related to the workshop on two levels. Generally, I’m a picture book writer. Fortunately, picture books have characters that need to be developed and need to drive a story. Our conversation about finding the right character applied to my search for the perfect lead for my stories. But I’ve also been dabbling in novel writing with NaNoWriMo (National Novel Writing Month). What a challenge! I completed a novel last year, but it was based on a true story. This year, the challenge is coming entirely out of my imagination. And I am way behind schedule.

I left Dan’s workshop wishing I had known everything he said before beginning my novel. But I also felt a lot better about how far behind I am in NaNoWriMo! Less to re-write! But more than that, I felt really excited to get to know my characters. I felt equipped to begin “hiring” for the main character in my newest picture book. And after a critique with Dan, I have the next steps to getting my story good… maybe not done, but good.

Yeah, we have it great. And not just because the successful writers of our generation are willing to generously share the magic with us… but also because of the rest of us who keep showing up and plugging away at making our craft better and better. Mercer and Jane are indeed awesome. But so are Maria, Patti, Angela, Catherine, Lindsey, Twyla, Kim, Lenore, Daniel, Juliane… and you.

See you at the next one! 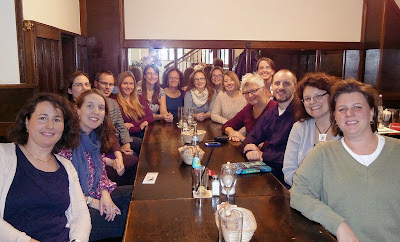